Playing PUBG Mobile is not illegal, the Indian version could be coming soon

PUBG Mobile was never ‘banned’ in India, instead, its access was blocked by the government under the provision of Article 69A. If PUBG Corp releases the Indian version of PUBG Mobile, it will not come under the previously banned list.

This is the actual fact we have come to, after digging up the whole situation through RTIs. Gemwire has published the government's answer to a series of questions related to the PUBG Mobile India ban. Here are the questions asked to the Govt.

This Ministry has not 'banned' for public access the PUBG Mobile Nordic Map: Livik App under the provisions of Section 69A of the Information Technology Act, 2000.

Follow up to the first question, if the ban implies to the new application on what basis would that be?

Blocking applies to a specific App only.

Is there an open dialogue taking place between MEITY and PUBG Corporation/Krafton INC.

No formal dialogue with PUBG/Krafton is held by this Ministry. 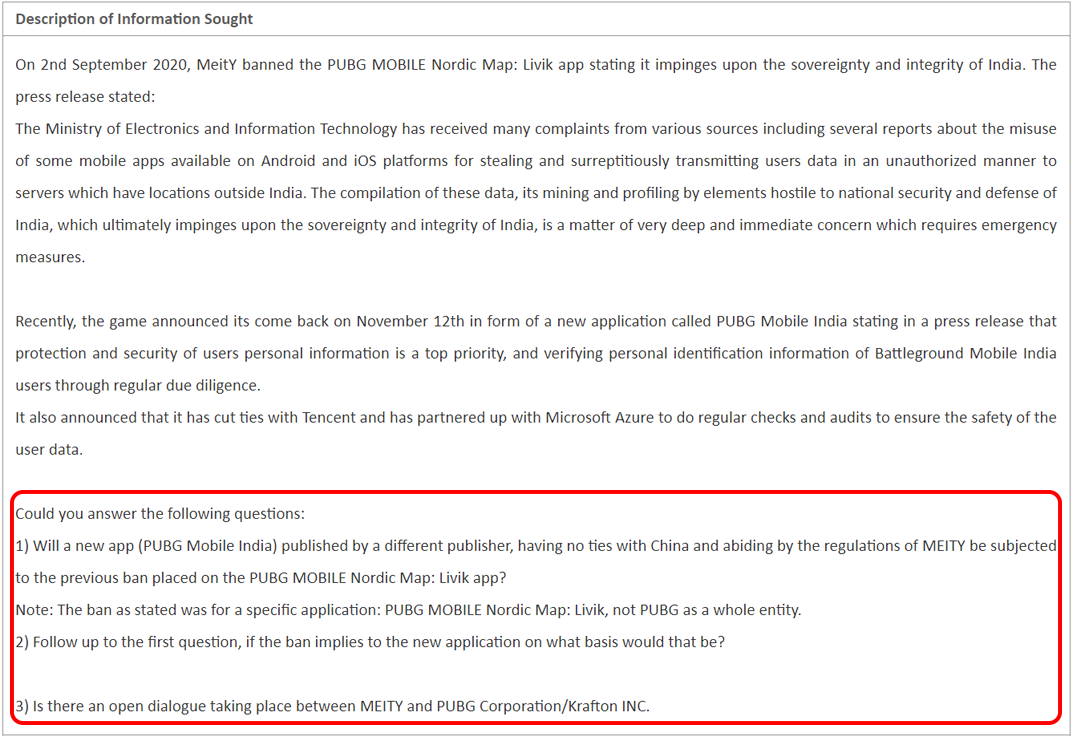 PUBG Mobile Korean version, or any other version is not illegal

As we said PUBG Mobile was not banned, which means if you play the game with a VPN or any other jugaad, it's not illegal. Also, the ban was only specified for “PUBG mobile Global version and PUBG mobile Lite” and not other versions of PUBG Mobile including the Korean version or PUBG entity as a whole.

However, the matter of concern here for PUBG Mobile fans here is that there has been no formal communication between MeitY and PUBG Corporation/KRAFTON. This could mean two things:

The possibility of being the first reason is much more because of various reasons like PUBG Corp has been teasing the launch of PUBG Mobile India very actively. But whatever be the reason, the good news is that PUBG Mobile India might get launched sooner than we expect.