The Esports Club Gauntlet - Season 1 - Regular Season which kicked off the 12th of June, Saturday is the league season of the TEC Gauntlet Season 1 featuring a 2,50,000 INR prize pool up for grabs for 16 teams split in groups of two.

Here are the summarized events from Day 10 if you missed them:

The Gauntlet Series is brough to you by The Esports Club and is sponsored by AMD & WD Black.

Day 11 started with the Kuch Bhi v/s Team FANGS game, which was very intense but Team FANGS took it home 2-0. The series scoreline does not at all reflect the closeness of the series, with both maps ending in 13-10, and 13-11 on Ascent and Haven respectfully.

Cactus and B2 both had outstanding games, with B2 dropping a whopping +12, 1.38 KD on the Cypher / Secondary Duelist role. Cactus as expected put out his great Jett performance, leading his team to the win.

The other game we saw was a disciplined Velocity Gaming taking on True Rippers. VLT played this series and took the first map, Haven 13-10, which is historically one of VLT's weaker maps, whilst they definitely turned up on Icebox, taking it 13-1. 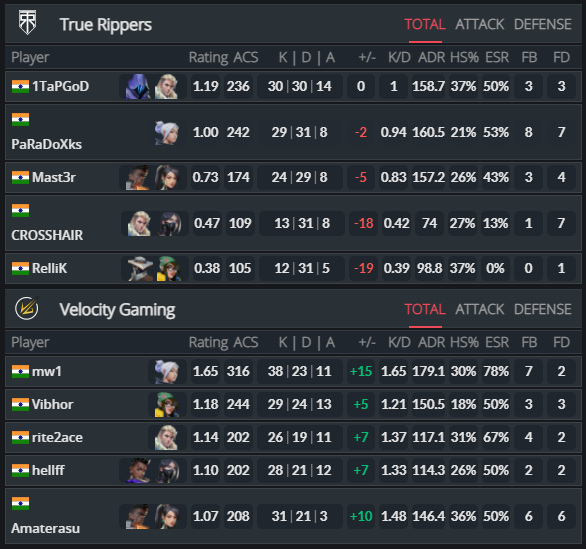 mw1 was the man that stood out today with a massive 1.65 KD, and a 78% Entry Success rate! The rest of the team also wasnt letting down with not a single player going negative. True Rippers had far from the best day with them giving away 22 first bloods over two maps.

Looking ahead to Day 12, T69 will be taking on Enigma Gaming whereas Samurai Esports go up against ROG Academy.

The games will be streamed live here. Tune in at 11 AM IST for action packed VALORANT goodness!